The Type 2 diabetes drugs, Byetta, may be associated with an increased risk of pancreatitis, and possibly even pancreatic cancer. In March 2013, the U.S. Food & Drug Administration (FDA) said it was investigating a possible association between Byetta and pancreatitis and precancerous changes to the pancreas. In addition to Byetta, the FDA was also investigating a number of other diabetes drugs in the same class, including Bydureon, Janumet, Janumet XR, Januvia, Juvisync, Kazano, Kombiglyze XR, Nesina, Onglyza, Oseni, Tradjenta, and Victoza. 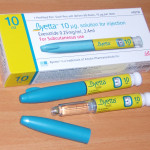 Gilman Law LLP, a leading consumer protection law firm with over 40 years of experience safeguarding the rights of victims, is investigating Byetta lawsuits on behalf of individuals who developed problems with their pancreas while taking Byetta or any of these other type 2 diabetes medication in the same class as Byetta.  If you or a loved one suffered from pancreatitis, precancerous changes to your pancreas, or pancreatic cancer, and were treated with Byetta or a related medication, we urge you to contact Gilman Law LLP today to learn more about filing a Byetta lawsuit.

In March 2013, the FDA issued a Drug Safety Communication regarding possible risks associated with Byetta and other diabetes medications known as incretin mimetics.  All of these drugs lower blood sugar levels in diabetics by mimicking a natural hormone in the body that tells the pancreas to release more insulin after eating.  Some incretin mimetics, like Byetta, are injectable medications, while others come in pill form. In its March 14th communication, the FDA said it was conducting a review of the drugs after unpublished findings by a group of academic researchers suggested an increased risk of pancreatitis, or inflammation of the pancreas, and pre-cancerous cellular changes called pancreatic duct metaplasia in patients with type 2 diabetes treated with incretin mimetics.

The FDA announced its safety review just weeks after a study published in the Journal of the American Medical Association found that use of Byetta and other incretin mimetics doubled the risk for pancreatitis, a condition that is also linked to an increased risk for pancreatic cancer.  According to a study published in the medical journal Gastroenterology in February 2011, the development of pancreatic cancer among Byetta users was three times greater than among other diabetics.  This is not the first time the FDA has raised concerns about incretin mimetics.  The agency previously added information about some fatal cases of pancreatitis to the package inserts for Byetta in 2007, and Januvia and Janumet in 2009.

Legal Help for Victims of Byetta

A number of Byetta lawsuits have already been filed in courts around the country.  If you took Byetta and were diagnosed with pancreatitis, pre-cancerous changes to the cells of the pancreas, or pancreatic cancer, you may be entitled to significant compensation.  For a no-obligation evaluation of your potential Byetta lawsuit, please fill out our free consultation form or call us direct to speak with one of our attorneys at (888) 252-0048.