A woman from Fresno, California who took the drug Actos for 8 years has filed suit in California Superior Court alleging the type 2 diabetes drug caused her to develop bladder cancer. The Plaintiff, who is being represented by Gilman Law LLP, a national law firm representing individuals with Actos injuries, continued taking Actos for two years after her bladder cancer diagnoses, and claims that Takeda Pharmaceuticals and other Defendants failed to provide adequate warnings about the drug’s life-threatening side effects.

END_OF_DOCUMENT_TOKEN_TO_BE_REPLACED 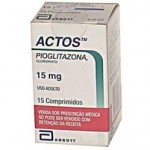