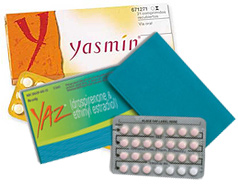 On April 10, 2012, the U.S. Food and Drug Administration (FDA) announced that it was requiring Bayer, the maker of the allegedly defective birth control Yaz and Yasmin, to change its label for drospirenone-containing birth control pills (Yaz and Yasmin). The revised label includes the increased risk for developing dangerous blood clots.

The revised label is a result of previous studies have reported a three-fold increase in the risk of blood clots for drospirenone-containing birth control pills such as Yaz and Yasmin when compared to “older generation” birth control pills containing levonorgestrel or some other progestins. The advisory panel that met in December voted 21-5 that labeling on Bayer’s Yaz Birth Control Pill and Yasmin Birth Control Pill is inadequate and should be revised to better reflect the higher risk of blood clots associated with these drugs. This prompted the FDA decision to revise the Yaz labeling and Yasmin labeling.

How To File A Yaz Claim or Yasmin Claim